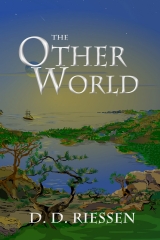 This is one of those stories where I thought I had it nailed, but then didn’t like the ending. After rewriting that, I didn’t like the beginning. After changing that, the ending no longer fit. I bounced back and forth for many years, going from one end of the story to the other, changing characters, time frames, moving chapters around, throwing my hands up in despair until I finally gave up, thinking that it was not possible to write such a story.

It was only after Oskar started writing a journal of his adventure on Nerissa in 1883 that the whole plot started to come together. Nerissa sails into a storm and an uncharted island. If it wasn’t for a magical stone, a dog and a blue moon, Oskar would’ve died. Instead, he lived to tell us about it.

Fantasy, time travel, science fiction all in one? Sure. Why not? It’s a good read!

Paperback: The Other World

Digital:  The Other World